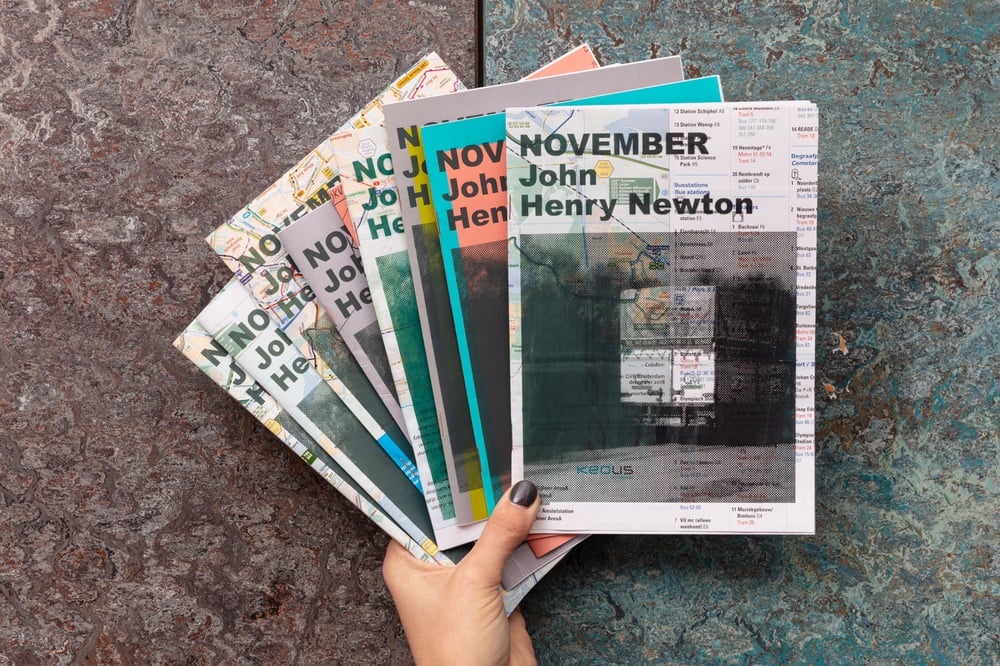 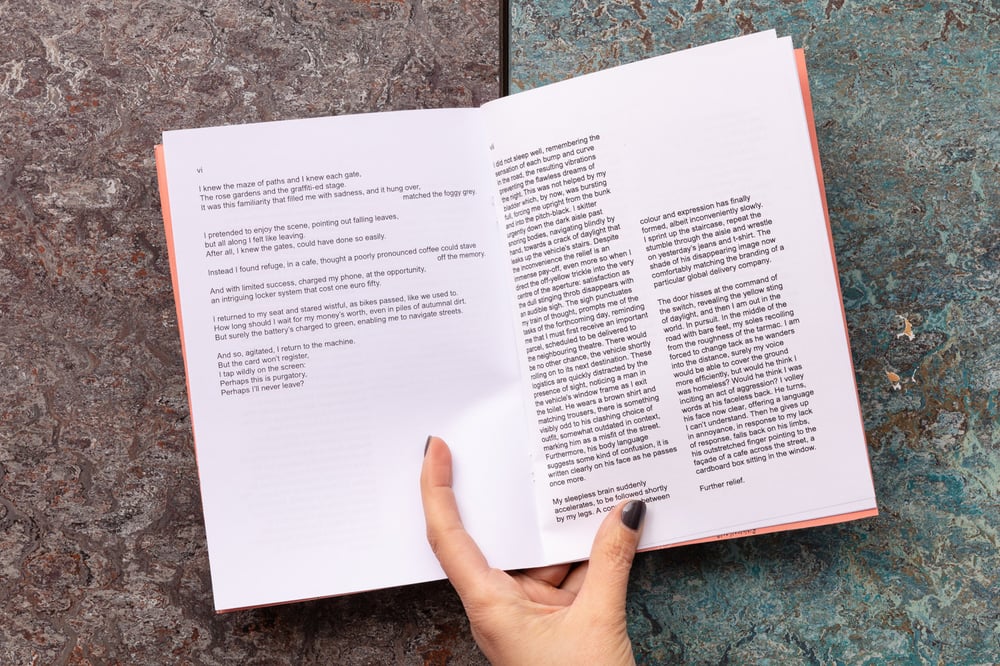 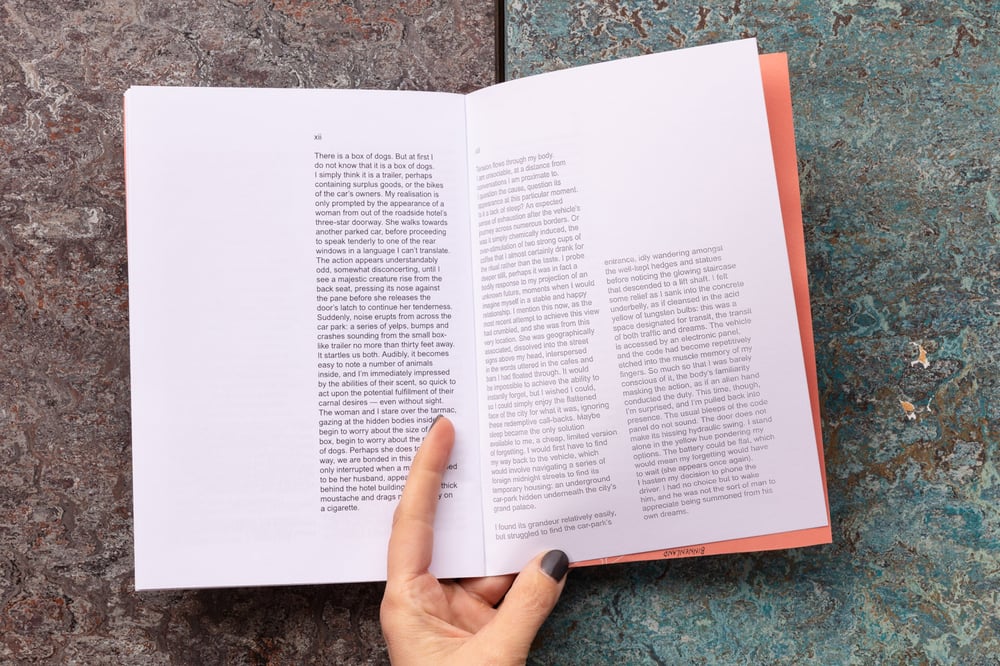 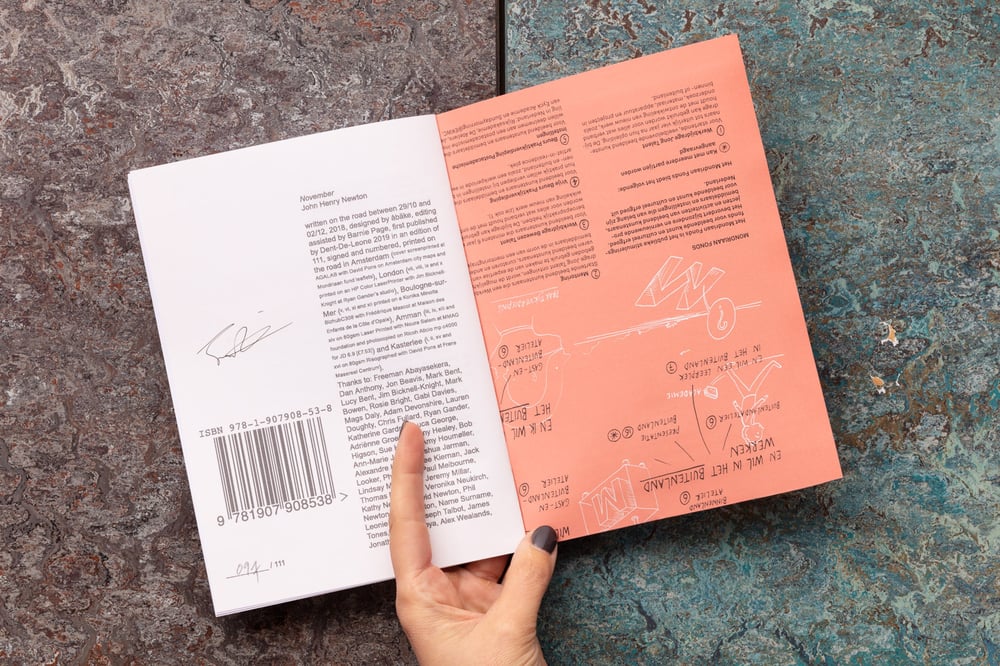 Written in between performances of a month-long tour, John Henry Newton’s ‘November’ documents a series of reactions whilst on this unique journey travelling across numerous countries and borders. The texts occupy the gap between our sense of interior and exterior, recording the sometimes baffling relationship between ourselves and the external world. Newton deliberately subverts the ocularcentric traditions of a ‘tour’, choosing not to show any image-based evidence of the events. This, in turn, offers the reader the opportunity to reconstruct the scenes imaginatively through the meander of the text and space. Produced in collaboration with designers Åbäke, the physical book was also created on a secondary tour, with individual sections printed at different locations. The limitations of each site offered a variety of materials and processes, and In this sense, the production reenacted the content in order to dictate the physical form.

John Henry Newton is an artist and a member of the band JOHN (johntimestwo.bandcamp.com). He is based in Crystal Palace, South London.

*copies are sold by the artist through personal encounters for 5.00.

LPPL, a seven year-old, just finished stapling the last copy of November, a publication written by John Henry Newton. She did so, convinced binding 111 of those (I helped) was a fun activity after school. The stapling rhythm adding to the youtube soundtrack of JOHN, a “brutal” band’s session on KEXP playing on the laptop next to the work station.

As a publisher it is always when you hold a book in your hands that experience and complete subjectivity interact in the decision of the retail pricing. The general tendency is to feel the customer will want to spend the least and won’t see the subtle near invisible details that did cost a lot but on better days one trusts that people will consider Art beyond its commercialisation and after all, money is just an illusion so yes, I want this, whatever the cost. This, let’s be brutally honest is rarer. No wonder major publishers will go for standard forms and trust decades of marketing, psychology research etc. Having identified the unnecessary waste of elitist finishing that only seventeen people will notice and even so they would likely be the kind of people you would give the book to in the first place. John’s book is the worst as it conspicuously disguise as a photocopied fanzine of only 20 pages, cheaply stapled A5 one would dismiss on the dishevelled display systems of Rough Trade . One could argue it camouflage itself so well as it is indeed it too. When I was young I made such zine and I recall it wasn’t about money at all, simply the joy that a recognised and official retail system would surprisingly agree to display it for a potential sale but mostly return.

Let me praise the modest opus.

It took three years in the making for John Henry Newton to write the 13 short texts contained.

The world doesn’t consider much the length of work before it is made public unless it is the single magnus opus of said author who preferably would have died giving birth to it. There are only 111 of the first edition and no two covers are the same, the more observant might notice the white standard papers are different shades and weight and the inks have stuck to it differently, simply because a standard A4 sheet of paper is apparently not the same in Amman, Boulogne, Amsterdam or Kasterlee where they were printed, piggybacking other projects. John’s words have travelled in its printing process before you take it home. Those words, come to think of it, have cold brewed for years, starting from the generous incentive of Ryan Gander proposing the profit from the sales of his Artists Cocktail book to go help produce the publication of a younger Artist, namely John.

Many years on and attempts by John and his publisher/designer to come up with something substantial failed.

Then early 2019 Ryan emailed to claim the money to produce a book (The Annotated Reader, also available here). Coincidentally John had emailed three days earlier to announce his intentions to publish texts he had written during his touring of JOHN. Effectively he had piggybacked his musical side job (to, dare I say his main job of being an Artist?) to produce the content of what would become November. The challenge was to make it for the remaining budget which was zero. A few months later it was done. We are very happy with it and can again thank Ryan but also all the different people who contributed to making it publicly available.